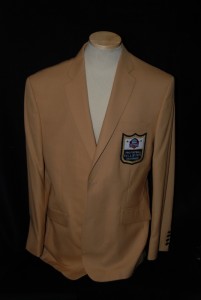 Last week I got a call from Lance Alworth’s office.  Lance had some football memorabilia at his office, and he was hoping that I could archive it along with the rest of the momentoes from his distinguished football career.  I picked up several items, the most interesting of which was his Pro Football Hall of Fame jacket.

It turns out that the Hall of Fame reissued jackets to all inductees this past summer.  The clothing manufacturer, Haggar, has made the coats for nearly 35 years.  The HoF called on them this year to update the garments to ensure that all inductees will be wearing the same coat, and not 30+ years worth of variations.  A bit of research told me that many of the jackets are simply huge.  For example, former Green Bay Packers defensive end, Willie Davis, wears a size 60XL!  Lance’s is much smaller, and quite a neat piece of clothing. 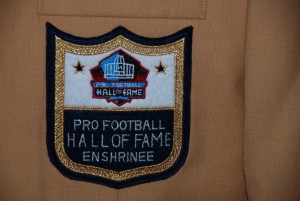 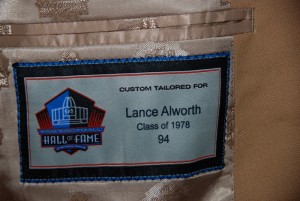