Phil Tuckett of the San Diego Chargers and NFL Films

Phil Tuckett of the San Diego Chargers and NFL Films

Phil Tuckett suited up for a single game for the San Diego Chargers in 1968, and his time as a professional football player consisted of a year-and-a-half spent mostly on the Chargers practice squad.  One might surmise that Tuckett’s contribution to professional football was minimal, and they would be correct, until taking into consideration that after retiring as a player Tuckett spent the next 38 years working for NFL Films.  In fact, Phil Tuckett won 30 individual Emmy Awards in 30 years as a producer/director/writer/editor/cinematographer, documenting the NFL.

Phil Tuckett was one of the best interviews subjects that I encountered while researching my book on the AFL Chargers.  I always figured that it was because he was a professional football player with a journalists soul, which caused him to notice things differently than his teammates.  Below is a portion of the interview that we did in 2003.  I asked a single question, and he responded with a thoughtful, in-depth and interesting answer.  Enjoy!

AFL – Which of your teammates impressed you the most? 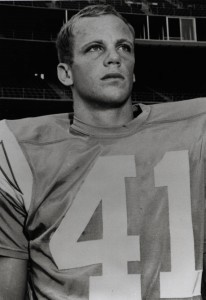 PT – Lance Alworth.  There is not even a close second.  Lance Alworth was the kind of gifted natural athlete that maybe Michael Jordan was in basketball.  He was just that much better than everyone else.  It was just so apparent from any time you stepped on the field.  He had been an NCAA champion in the 220 running at Arkansas running track.  So he was a guy that was faster than anyone else on the team.  He was super fast as a sprinter.  And then he had all that fluidity and grace and leaping ability as well.  And then he played hard.  He was just a tough competitor.  People called him Bambi because he was so fluid when he ran, but you look at all his footage, there has never been a tougher guy catching the ball over the middle and taking his punishment with a big smile on his face.  He just loved to play and when you love to play, and you’re so much more talented than anybody else, it is almost unfair.  The only chink in his armor was that he hated to practice.  And he was always looking to try to get out of practicing.  He was sort of coming up with these excuses why he had to screw around on the sidelines rather than be out on the field.  But I always looked at it as the kid who is so much smarter than everybody else in his high school class that he should be in college calculus now and they’re still doing algebra.  So he didn’t really need to practice.  In fact, he was sort of disdainful of all these precise elements that everybody else had to adhere to in Gillman’s offense, which was to run you patterns intricately and to be in a certain place at a certain time.  He just ran and got there.  He never ran an out pattern on a sharp cut.  He would run banana-outs.  He wasn’t faking anybody out with where he was going to go; you just couldn’t catch him.  You just couldn’t keep up with him.  But it used to drive Gillman crazy because he was always yelling at Lance for not doing the precise cuts and stuff.  Lance would just laugh because he didn’t need to.  Why waste his time counting out his steps.  He and Hadl were in such a zone as far as their understanding of each other, John would literally just call a pattern and Lance would be in a certain point and know where the ball was going to be coming, who cares how he gets there.  He was just so intuitive and so talented.  And such a competitor and so tough, that what else do you need?  What else could you possibly have?  But of course I had first-hand knowledge of having seen him up close through that whole year.  But I also have seen a lot of the great players since him, and to me he’s in the top five of all time great NFL players.  So yeah, there wasn’t anybody else on that team that was in the top 100, so he was by far the best.  Now John Hadl as impressive because he had the great skill at delivering the ball to where it needed to be delivered for the receivers to catch it.  And then Gary Garrison was just the opposite of Lance.  He was a pattern guy.  He ran really strict, disciplined patterns, and then that’s how he got open.  He also was confident, and a tall guy. He could catch the ball up into the middle.  Those three guys were the ones that made Gillman’s offense so impossible to stop.  And then I think Ron Mix impressed me because he never sweat.  He was a friend of mine, which was flattering to me, being on the scrubini squad.  That he actually paid attention to me.  We would sit next to each other in meetings and say smart-ass things about what was going on, and sort of laugh at the situation because it is pretty funny to have all these grown men sequestered away at training camp and just the way you kind of see the humor in life.  He certainly had that approach.  So I would just comment about how the guy could play football and not sweat.  I would say, “Ron, you could be a lot better if you would just sweat.  Just break a sweat once in a while.”  Part of it was that he was so efficient in the way he would play that he would be out there doing his job in the pits.  And while everybody else was breathing with snot dripping down their faces and dirty and everything else, he would come out after a series and look like he had been to the prom or something.  He just had too much class to sweat.  But really a good player and a great guy.  I stay in touch with him a little bit.  He’ s very intelligent, obviously, and with a great sense of humor.  A good person.

I don’t know that he knew that I was writing at the time, but he’s been impressed with some of the things that I have accomplished here at NFL Films.  And I think that kind of drew us together a little bit.  He just wasn’t willing to take thing at their face value.  He was analyzing the situations, and as I said that I always kind of liked to do.  So we shared that in common.  One thing that we had fun with was Joe Madro, who was the offensive line coach.  He was always screaming and yelling at Ron Mix to do this and do that.  Ron was just too dignified to respond to the abuse.  But Joe Madro was about 5’3”.  He was a stout little guy.  Of course Ron Mix was real stately at about 6’6” or so.  What an odd couple they were.  Ron one time leaned over to me in a meeting and he said, “You know, Joe’s a real pistol.  He wants to improve himself, which is good.  But he has this interesting way of doing it where I found out that every morning he looks up five words in the dictionary and then he determines that he is going to use those five words in the context of something that he is talking about during the day.  Number one it will improve his vocabulary.  Number two it will impress people that he knows a lot of interesting words.”  I said, “Oh, that’s bullshit.”  He said, “No, it’s true.  I’ll prove it to you.  You just sit here, but he’s going to say something that will be so out of the blue and out-contexed with what he is talking about.”  So sure enough, he got up and was talking something about the schedule, because he was not only the offensive line coach, but Gillman’s assistant head coach as they call them these days.  He would take care of a lot of the details about traveling and where you put your pads and everything.  So Joe was talking along about something about turning your jock straps in so they could be washed before went to some practice at another camp.  The word was ambivalent.  So he says something about getting your jock strap washed and he says, “And it’s not something that I want you guys to be ambivalent about.”  So Ron Mix looks over at me and he says, “That was number one.  He got that one in.”  And then he checked his watch and it was 10:14 and he had four to go.  So he used to walk around all the time and write down words that Joe had probably got out of the dictionary that morning and slipped into his conversations.  But that was the kind of stuff, and he was just such a pleasure to be around and so fun.  And then he was a good friend to me, and as I said, he encouraged me and there was nothing in it for him because I had no clout in that organization whatsoever.  He just did it out of a feeling like we’re compadres and I trusted him and his advice and he gave me good advice and I still think a lot of him.  Plus he was a great player.  He’s in the Hall of Fame.  So when you look at that team, it was not without talent.  .