Being a collector and historian of the American Football League, I occasionally run across interesting sidebars and tidbits to the players, the league and the vast world of collectibles.  One such case is the situation involving a couple of former AFL’ers and their 1965 Topps football cards.  Rick Redman and Larry Elkins both began their careers in professional football in 1965.  Redman, a linebacker from the University of Washington, played nine season for the San Diego Chargers, from 1965-1973.  Elkins, a first-round draft choice of the Houston Oilers, was a wide receiver from Baylor University, whose playing time in the AFL was from 1965-1967.  Both were highly-touted players coming out of college and as such, both had their first football cards appear in the famed 1965 Topps set.
As we were wrapping up a telephone interview for my book, Charging Through the AFL, I asked Rick Redman if he would sign a few of his football cards if I sent them to him in the mail.  He graciously agreed to sign, and added the following commentary about his 1965 Topps card:
“I am absolutely amazed at how many cards I get in the mail.  I get probably three a week.  I just can’t believe it.  There’s a funny story about one of those cards.  I don’t know if you remember a guy that was drafted the same time I was, by the Houston Oilers.  He was a guy from Baylor and his name was Larry Elkins.  He was an All-American at Baylor.  In fact, we played against each other and were on several all-American teams at the same time.  Well, Topps screwed up on the bubble gum cards and got our pictures mixed up on the cards.  So every once in a while I’ll get a card that has his picture on it.  And I’ll send it back and let the people know that they have something that they should really hang onto…  You ought to try and find his card with my picture on it.  I’ll sign that for you too.  Every time we saw each other before a game we’d say, “You never looked so good as when you were on my card.”  We always had this friendly banter back and forth.”
So I sent Rick Redman his 1965 Topps card to sign for me.  He returned it quickly with the following note:

A few weeks later I was able to track down a 1965 Topps Larry Elkins card.  I sent it to Redman to sign as well, thinking that it had Redman’s photo on it.  Redman sent back the following note: 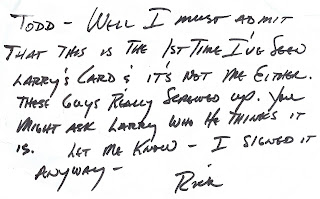 A month or so later, I purchased additional copies of the Redman and Elkins cards, this time to send to Elkins.  I dropped them into the mail, headed to an address in Brownwood, Texas.  A week or two went by before I got a phone call from a nice lady saying that she was Larry Elkins’ sister.  She said that Larry worked overseas, but got back to the States a couple of times each year.  She didn’t know how long it would take, but wanted me to know that I would get my cards back at some point.  I thanked her and eventually forgot about the whole thing.  But sure enough, roughly 23 months later, I received both cards back in the mail, signed by Larry Elkins.  It turns out that Elkins’ sister had sent my package to him in England, and then he sent it back from there.  He included the following note with his reply: 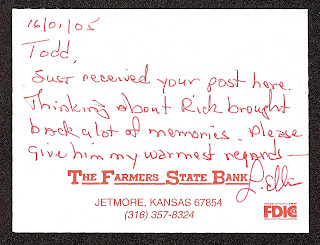 Enclosed were the Elkins and Redman cards, both signed by Larry Elkins.  And so the mini-collection was complete.

Larry Elkins and Rick Redman both enjoyed prosperous careers after football.  Redman returned to the state of Washington and embarked upon a long career with Sellen Construction, of which he is now the Chief Executive Officer.  After a knee injury ended his football career prematurely, Elkins traveled the world working for various companies and in the entertainment industry.  Prior to his recent retirement, Elkins spent a dozen years in Saudi Arabia, working as a consultant to the Ministry of Water, which operated 26 desalination plants, pipelines and pump stations along the Red Sea and Persian Gulf.
By Todd Tobias|2010-10-22T20:30:00-07:00October 22nd, 2010|Houston Oilers, Larry Elkins, Rick Redman, San Diego Chargers|25 Comments