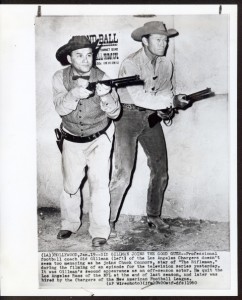 HOLLYWOOD, Jan. 19 — SID GILLMAN JOINS THE GOOD GUYS — Professional football coach Sid Gillman (left) of the Los Angeles Chargers doesn’t seem too menacing as he joins Chuck Connors, star of “The Rifleman,” during the filming of an episode for the television series yesterday.  It was Gillman’s second appearance as an off-season actor.  He quit the Los Angeles Rams of the NFL at the end of last season, and later was hired by the Chargers of the new American Football League.”

In the short period between his firing by the Los Angeles Rams, and hiring by the Los Angeles Chargers, Sid Gillman had a bit of time to try new things.  One of those things was acting.  He was offered a small role on the popular television show, The Rifleman.  Gillman played a character named Ben Tooker, and somehow worked a bow tie into his costume.  Gillman commented in Josh Katzowitz’s book, Sid Gillman, Father of the Passing Game, “I can’t ride.  I can’t shoot.  I can’t act, and I’m not very pretty.  The script-writer really faces a problem when it comes to figuring out my role.”