Why is Johnny Robinson not in the Hall of Fame?

Why is Johnny Robinson not in the Hall of Fame? 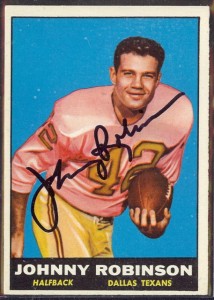 There is a feeling amongst fans of the American Football League that players from the AFL get overlooked by the voting committees of the Pro Football Hall of Fame.  Everyone has their own favorite player that they feel has been shorted in the voting process.  Typically fans argue the hardest for a player from their home team.  But when the hall of fame becomes a topic of conversation amongst the more unbiased of AFL fans, one name is generally agreed upon by all as the one man most deserving.  That player is Johnny Robinson of the Dallas Texans & Kansas City Chiefs.

Johnny Robinson played in the same offensive backfield at LSU as Heisman Trophy winner and Houston Oilers first-round draft choice, Billy Cannon.  Robinson was the first round selection of the Dallas Texans in the 1960 AFL Draft, and it was as a running back, sharing the backfield with Abner Haynes, that Robinson spent his first two seasons in professional football.   He was a serviceable, if not spectacular back, and rushed for 658 yards and six touchdowns while catching 76 passes for 1,212 yards and nine scores in two years.

Entering into his third year in the league, the Texans moved Johnny Robinson into the defensive backfield, and he quickly made a home for himself at safety.  His success was immediate and enduring, and when Robinson retired after the 1971 season, he had made his mark as perhaps the greatest defensive back in AFL history.  Take a quick glance at this following list of Johnny Robinson’s accomplishments, and explain to me why this man does not have his name enshrined with the greats of the game in Canton, Ohio.

When asked who he believes has been most snubbed by the Pro Football Hall of Fame, hall of fame member Lance Alworth told me, “Johnny Robinson of the Chiefs.  He was the best defensive back I ever played against.  He’s my man.”

There is no such thing as a perfect voting system.  There will always be a deserving player somewhere that get overlooked for one reason or another.  But when the athlete in question is the caliber of Johnny Robinson, then his exclusion becomes less an issue of circumstance and more an egregious omission.  Johnny Robinson deserves to have his bust in Canton, amongst his Chiefs teammates, Buck Buchanan, Bobby Bell, Willie Lanier, Emmitt Thomas, Len Dawson, Jan Stenerud, coach Hank Stram and owner Lamar Hunt.