Why is Dave Grayson not in the Hall of Fame?

Why is Dave Grayson not in the Hall of Fame? 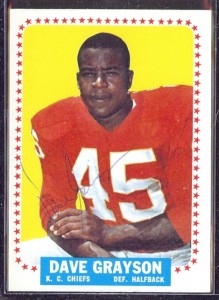 Last week we discussed how Texans and Chiefs defensive back, Johnny Robinson, has been overlooked for induction into the Pro Football Hall of Fame.  Ironically, there is a second player from that early Texans secondary that also deserves serious hall of fame consideration for his accomplishments in the old AFL.  That man is Dave Grayson.

Dave Grayson grew up in San Diego’s Logan Heights district, and developed his athletic skills at a place the kids called “The 40 Acres.”  Among his playmates were Art & Charlie Powell, and Negro League and Pacific Coast League baseball star, Johnny Ritchey.  Grayson, attended San Diego’s Lincoln High School and then the University of Oregon before signing as a free agent with the Dallas Texans in 1961.  Grayson worked his way into the Texans starting lineup as a rookie.  He hauled in three interceptions in ’61, one of which he returned for an AFL-record 99 yards and a touchdown.

In 1963, the Dallas Texans moved to Kansas City and became the Chiefs.  Dave Grayson remained a starter in the secondary through the 1964 season when Al Davis brought Grayson to the Oakland Raiders in a trade for cornerback Fred “The Hammer” Williamson.  Grayson was an integral part of a tough Raiders defensive unit through the end of his career in 1970.

When the AFL came to a close at the end of the 1969 season, Dave Grayson was selected as one of two cornerbacks on the American Football League’s All-Time First Team.  Among the many career highlights that made him deserving of such recognition were:

It is unfortunate when a player does not receive the recognition that he deserves.  That two of the greatest defensive backs in AFL history, who both played in the same defensive secondary, have been passed over for hall of fame consideration defies explanation.