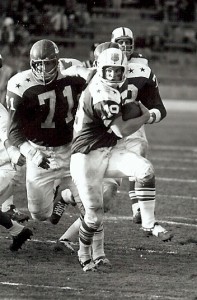 Living in San Diego and researching the American Football League, I have been fortunate to develop a relationship with Chargers hall of fame wide receiver, Lance Alworth.  Lance played an integral role in my first book, Charging Through the AFL, and in the years since it was published, we have worked together on several occasions.  One ongoing project that I have been able to help him out with is the management of the memorabilia that he accumulated during his years of involvement with professional football.  Despite his many successes and accolades, Lance does not care to have a display room to show off his trophies and memorabilia.  Instead, he asked me to catalog and archive it all, to ensure that it was all kept neat and in one place.  As a fan/researcher/memorabilia collector, this was one of the most enjoyable projects that I have been involved with.  There are jerseys, trophies, photos, game balls, cleats and all manner of photographs and publications in Lance’s football “accumulation.”

One piece that I particularly enjoyed is Alworth’s game jersey from the American Football League All-Star Game in January, 1964.  Lance shared the title of AFL Most Valuable Player in 1963.  In his first full season in the league, he caught 61 passes for 1,205 yards and 11 touchdowns, helped the Chargers to a 51-10 victory over the Boston Patriots in the 1963 AFL Championship Game, and generally wreaked havoc on secondaries throughout the AFL.  When all-star rosters were announced, it came as a surprise to no one that Lance Alworth would be playing for the western division squad.  Lance’s fantastic season continued on through the all-star game, and he caught six passes for 102 yards, though his western division squad lost the game by a score of 27-24. 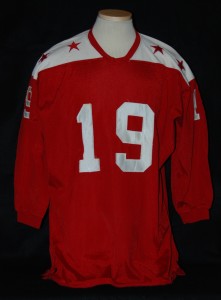 Lance still has his jersey from the game.  His classic #19 is displayed proudly on the red jersey with white shoulders, as opposed to the more familiar Chargers powder blue.  The jersey is still in wonderful condition, showing slight examples of use from a contest that occurred nearly 50 years ago. 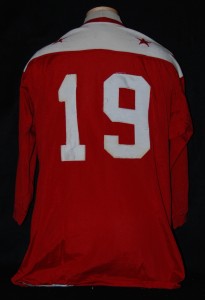 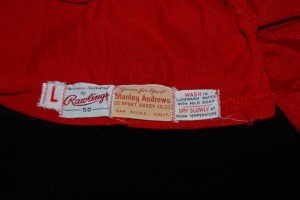