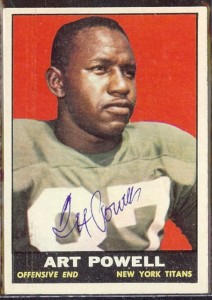 Art Powell seem to me to be one of the more blatant oversights in regards to hall of fame recognition.  Powell had a reputation for being surly, which has possibly factored against him with sportswriters.  Additionally, he was a strong-willed and outspoken African-American man at a time when being so was not readily accepted.  However, Powell’s (and teammates) boycott of games in segregated Mobile, Alabama, and New Orleans helped break down racial barriers in the South.  Perhaps that factored against him in his early years of eligibility, but surely should work in his favor?  Thoughts?