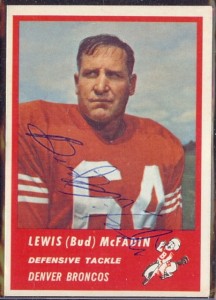 Like many of the men whose names occupied spots on AFL rosters in 1960, Lewis “Bud” McFadin had spent time in the National Football League before lacing up his spikes for the Denver Broncos.  McFadin played both ways while in college at the University of Texas, and earned All-America honors for his defensive work in 1949, and again with an emphasis on offense in 1950.  He was named Most Valuable Player at the College All-Star Game in Chicago.

McFadin was drafted by the Los Angeles Rams of the NFL in 1951, but served with the Air Force during the Korean War, and was unable to begin his professional football career until late in the 1952 season.  He played his first few season at offensive guard, but McFadin began to experience real gridiron success when he was moved to defensive tackle in 1955.  He earned All-Pro honors in 1955, and played in the Pro Bowl in 1955 & 1956, but opted for an early retirement after he was accidentally shot in the stomach during the 1956 off-season.

Bud McFadin spent the next few years in Texas, but out of professional football.  It wasn’t until the formation of the American Football League and the Denver Broncos expressed interest in him, that Bud McFadin came out of retirement to play again.  He picked up right where he had left off, and found himself on The Sporting News’ All-AFL Teams after the 1960, 1961 & 1962 seasons.  McFadin played one more season with the Broncos, before returning to his native Texas to play defensive tackle for the Houston Oilers in 1964 & 1965, at which point he retired as a player, but took over as the Oilers’ defensive line coach for the next five seasons.

After his time coaching in Houston ended, McFadin spent the remainder of his working years in ranching and oil field equipment sales.  Among the honors that he received for his football career were inductions into the University of Texas Hall of Honor (1973) and the Texas Sports Hall of Fame (1983).  Bud McFadin passed away in 2006, at the age of 77.