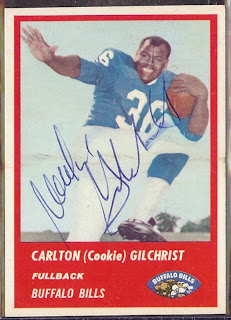 In the 10 years that the American Football League was in existence, there were many characters whose eccentric personalities and antics contributed to the overall “flavor” of the league.  While Cookie Gilchrist certainly participated in his share of notable off-field situations, no one can deny his athletic prowess and the hurt that he put on AFL defenders every Sunday.
Carleton “Cookie” Gilchrist was signed straight out of high school by Cleveland Browns coach, Paul Brown.  After Brown supposedly reneged on his promise that Gilchrist would make the team, Cookie went north to play in the Ontario Rugby Football Union where he won team MVP trophies in 1954 and 1955.  He joined the Canadian Football League in 1956, and was a CFL all-star in each of the next five seasons. 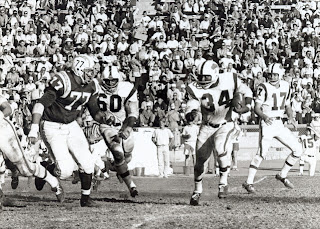 After losing Syracuse running back Ernie Davis to the Cleveland Browns when he chose to play in the NFL instead of the AFL, the Buffalo Bills signed Gilchrist to a free agent contract in 1962.  In his first season with the Bills, Gilchrist became the AFL’s first 1,000-yard rusher, and earned league MVP honors.  He followed that up by leading the league with 232 rushes for 979 yards in 1963, and a league-leading 12 rushing touchdowns.  Cookie then helped lead the Bills to the AFL championship in 1964, rushing for 122 yards in a 20-7 championship game victory over the San Diego Chargers.
While his performance on the field was a delight for Buffalo fans, Gilchrist’s off-field antics wore thin with Bills’ management.  Contract disputes and issues that seemed to continually disrupt the team’s balance led head coach Lou Saban to finally make a move with Gilchrist.  After three seasons in Buffalo, the Bills traded Cookie to the Denver Broncos for Rookie of the Year, Billy Joe.
According to newspaper accounts, the Broncos were initially interested in having Gilchrist pull duty, as a placekicker in addition to his responsibilities at fullback.  The team balked, however, when Gilchrist demanded two contracts – one as a fullback and another as a placekicker.  The relationship between player and management was strained over the situation, and it never truly mended.  As a Bronco, Gilchrist led the AFL with 252 rushes and six rushing touchdowns in 1965, and earned his fourth and final selection to the AFL All-Star team.  Gilchrist retired after the 1965 season. 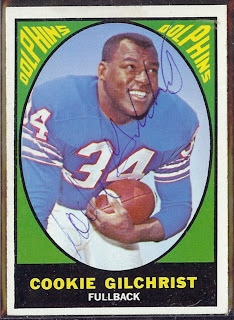 The 1966 football season found Cookie Gilchrist ending his retirement to play eight games for the expansion Miami Dolphins.  He returned to Denver in 1967, but played in just one game before retiring from the game for good.
Though his name has gone down as one of the dominant backs in the old AFL, football historians have to wonder what Gilchrist could have accomplished if not for the issues that continually cropped up away from the field.  Physically-speaking he was a man among boys, carrying 252 lbs. on a 6’3” frame that looked to be chiseled from granite.  His speed and strength were legendary, and his intensity was something to behold.  Sadly, Gilchrist seemed to wear out his welcome earlier than most, which leaves us all wondering what could have been nearly 50 years ago in Buffalo.
By Todd Tobias|2010-10-11T14:25:00-07:00October 11th, 2010|Buffalo Bills, Cookie Gilchrist, Denver Broncos, Miami Dolphins|21 Comments