Where is he now? The New York Jets’ Jim Harris

Where is he now? The New York Jets’ Jim Harris 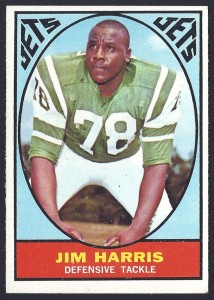 Most days I write articles that I hope will entertain and educate readers about something to do with the old AFL.  Today’s story has a bit of a twist to it because I am hoping that someone in our AFL community can help educate me a bit…

Jim Harris was a 6’4″, 275-pound defensive tackle out of Utah State University.  Harris was selected by the New York Jets with their seventh-round pick in the 1965 AFL Draft.  He made an immediate impact on the field, finding playing time in all 14 games his rookie season, a feat that he replicated in 1966 & 1967.  Unfortunately, quarterback sack and tackle statistics were not kept in the 1960s, so it is difficult to definitively report on Harris’s value to the team, but the back of his 1967 Topps football card states, “Jim certainly didn’t suffer from any sophomore jinx in ’66 as he continued as a top defensive tackle.  The big man is fast, smart and strong.  Nicknamed ‘Diamond Jim’ by his teammates, the defensive tackle works for The Police Athletic League in the off-season.”

Going into his fourth season in 1968, the Jet’s released Harris, along with seven other players, on August 26.  With that, his professional football career came to an end.

Getting back to how readers can help to educate me…  I would like to find out what happened to Jim Harris in his years post-football.  Where did he go?  What did he do?  I assume that he is still living, as I have not found anything to the contrary.  As you all know, I have a collection of trading cards signed by AFL players, and I would like to see if Jim Harris would sign his card for me.  He is the last living player that I need to complete my 1967 Topps set, and that, combined with the fact that I cannot find any information about him, have really piqued my curiosity about him.

So, is there anyone out there in AFL fandom that can give me a clue on how to find Jim Harris?