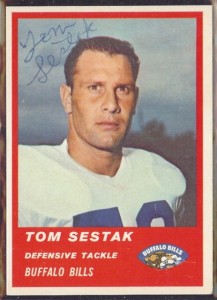 The Buffalo Bills selected Tom Sestak with their 17th-round choice in the 1962 AFL draft.  Sestak had played tight end at McNeese State University in Lake Charles, Louisiana, but when he arrived at his first training camp weighing 275 lbs of pure muscle, the Bills coaching staff moved him to defensive tackle.  The shift in position proved to be a wise move, as Sestak became an instant force on the Bills defensive line, where he was equally adept at rushing the passer and playing against the run.

Tom Sestak started all 14 games for the Bills in his rookie season of 1962, and continued in that fashion until the cumulative effect of multiple knee injuries forced him to sit out two games in his final season of 1968.  In the meantime, he became one of the most dominant defenders the AFL had ever seen.  Sestak was voted to four AFL All-Star teams (1963, ‘64, ‘65, ’66) and was one of just six defensive tackles in all of professional football to be chosen as a unanimous All-League selection in three-or-more seasons.  The other five, NFL men Willie Davis, Merlin Olsen, Deacon Jones, Bob Lilly and Gino Marchetti, are all members of the Pro Football Hall of Fame in Canton, Ohio.  Tom Sestak is not.

The Buffalo Bills had great success during Sestak’s career, and won consecutive league championships in 1964 & 1965, while also playing in the title game in 1966.  During a stretch covering the 1964 & 1965 seasons, the Bills defensive unit held their opposition without a rushing touchdown for 17 consecutive games.  While tackle and quarterback sacks were unofficial statistics during his career, Tom Sestak also contributed by scoring six touchdowns in his 96 career games, four of which came on interception returns, while the other two were fumble recoveries.

At the close of the AFL in late 1969, Tom Sestak was selected as one of just two defensive tackles to be named to the All-Time AFL Team.

Tom Sestak remained in the Buffalo area after his football career.  Big Tom Sestak died of a heart attack on April 3, 1987, at the young age of 51.  Some might consider it a blessing, however, as Sestak had been diagnosed with Amyotrophic Lateral Sclerosis (Lou Gehrig’s Disease) only the week before.  Since his passing, Tom Sestak has been named to the Bills Wall of Fame, and the Bills’ 50th Anniversary Team.